Rare Lost Beatles Demo For It's For You Found! 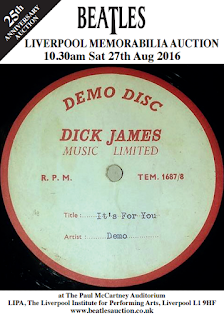 Every now and again we come across a real treasure for our auction and it really does take our breath away. This year we are extremely excited to have stumbled across a piece of Beatles history.

Back in 1964 the Lennon/McCartney song “It’s For You” was written especially for Cilla Black and Paul McCartney recorded a demo acetate that he sent round to the London Palladium for her to listen to. (This is mentioned in Cilla’s autobiography). Since then the whereabouts of this acetate has been unknown.

Well, until now that is.

Mislabelled in a collection of other acetates as being by Cilla this super-rare recording has resurfaced and will be up for sale in our annual Liverpool Beatle Memorabilia Auction on 27th August this year.

We could hardly believe it when we played through the collection of Cilla demos we had taken in for the auction and came across Paul’s voice.

This is an important, and previously considered lost, piece of musical history. It is expected to sell for £15,000 - £20,000, perhaps even more.

****The audio clip that was previously available has no been removed.****

Cilla’s version features Paul on piano and the single peaked at number 7 in the charts.


LETTER OF PROVENANCE
IT’S FOR YOU BY PAUL McCARTNEY

To Whom It May Concern

I confirm I have full legal title to the acetate demo of the recording of 'It's For You' by Paul McCartney, described as lot 190 in the Beatles Auction catalogue Liverpool 27th August 2016.

The acetate demo is believed to have been given to my late father by his sister Cilla Black, around 1964, when my father was around 18 years old. My father was an avid record collector who took great care of his record collection and he personally created the cardboard sleeve in which the acetate demo has been stored in his collection for more than 50 years. It is my father's handwriting that appears on the cardboard sleeve. It was only when we took this acetate demo, amongst others in my father's collection, to the Beatles Shop in Liverpool earlier this year, that it was found that the recording on the acetate demo was in fact that by Sir Paul McCartney rather than Cilla, as the labelling on the sleeve wrongly indicates.

Sir Paul McCartney was kind enough to send this demo recording to Cilla Black back in 1964 and she had a big hit with the song. When we found out that Sir Paul had not retained his own copy of the recording, as a courtesy and gesture of respect, we agreed it would be only right that, of all people, he be allowed to make a copy of the recording for himself for the sole use of adding it to his personal archive. Other than the single copy of the recording that he now has, we know of no other.

Email ThisBlogThis!Share to TwitterShare to FacebookShare to Pinterest
Labels: 2016
Newer Post Older Post Home
The Beatles Shop on Mathew Street has been proud to organise the annual Liverpool Beatles Auction for several years.