A Ticket to the end of the Cavern Club.

In 1973 the original Cavern Club closed it's door for the final time. Before it did there was one one last night. This ticket got you in to see the six bands on the bill. The back of the ticket announced that the new Cavern was opening across the road. 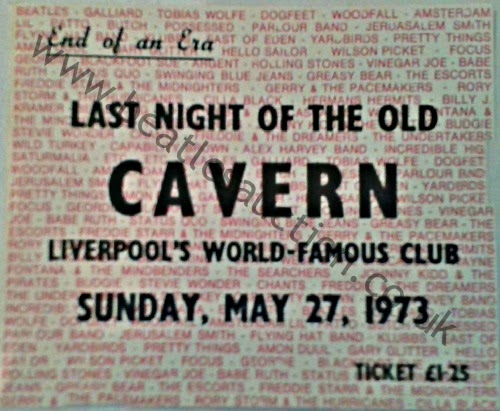 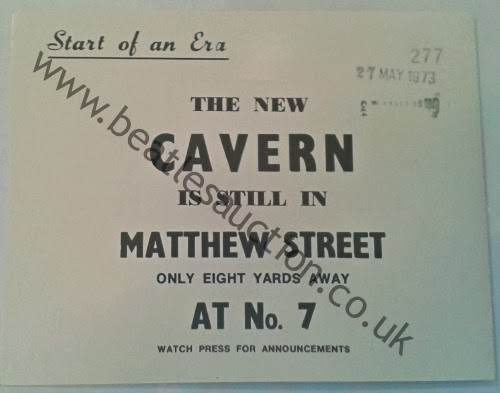 The ticket is going up for sale in our annual Liverpool Beatles Auction next August and carries an estimate of £90-£120.

The Beatles toured Australia in 1964 and this was the concert programme for the tour. 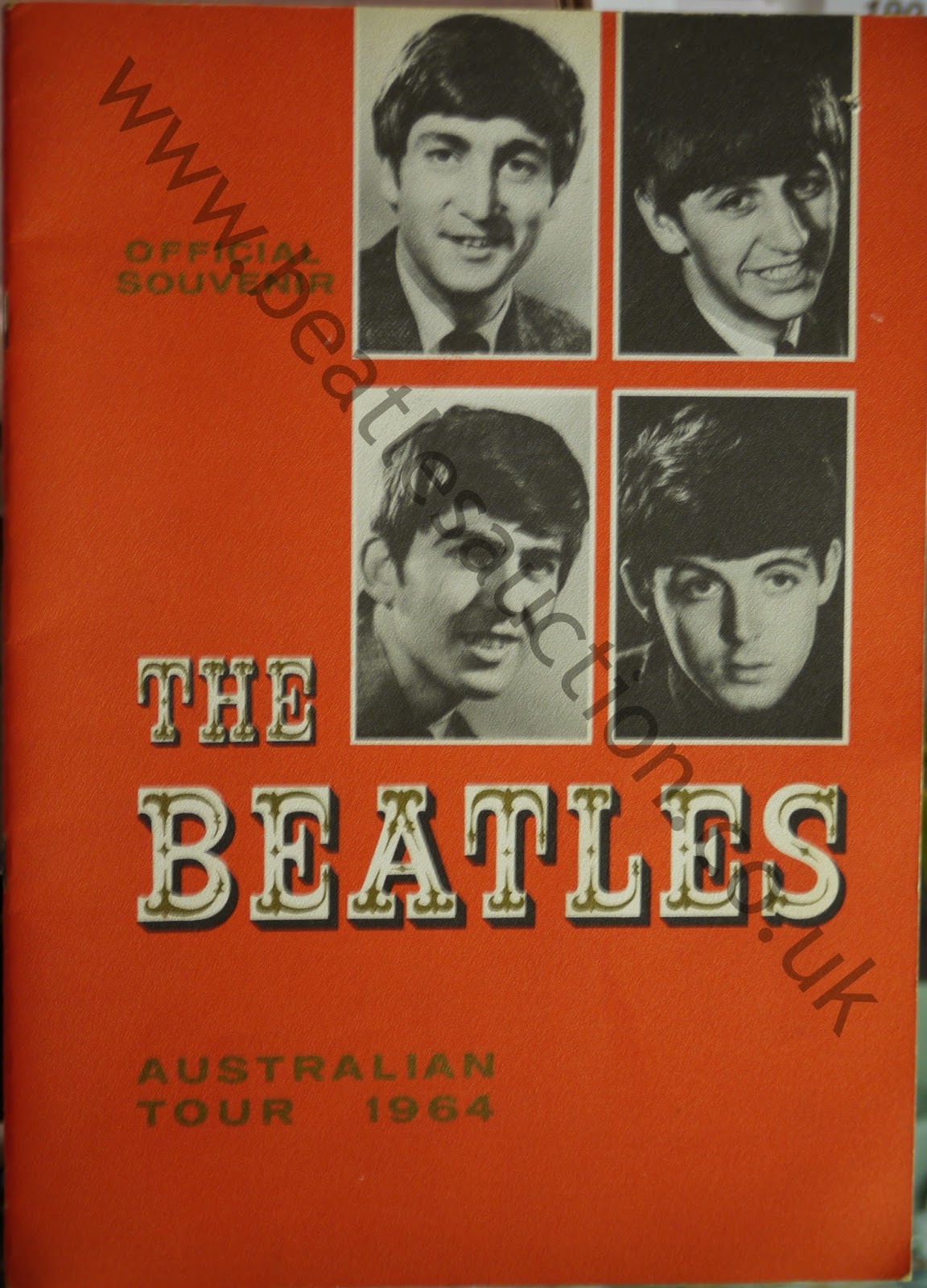 It will be sold in our next Liverpool Beatles Auction and is expected to fetch between £175 and £200.

This lovely fully signed copy of With The Beatles is going into our auction next August!

Unfortunately not one signature is by an actual Beatle. Demand for Beatles autographs was high and quite a lot of the time someone else signed for them. In this case all four Beatles signatures are by their road manager Neil Aspinall.  Bizarrely the "fakes" do have a value depending on who did them and because Neil was such a high profile member of the Beatles entourage we are hoping this set will reach between £250 and £350 for the vendor. Nowhere near the price of a genuine set, but they will still look good framed up and on the wall.

On the subject of things not signed by the Beatles that look good on the wall, the Fan Club photos below all feature printed signatures. We see these a lot. The way they were done makes it look like there's a pen imprint on the the card, but sadly they aren't the real deal. The cards shown will be part of a lot with a few other items in our auction, individually the cards are worth around £10 each. 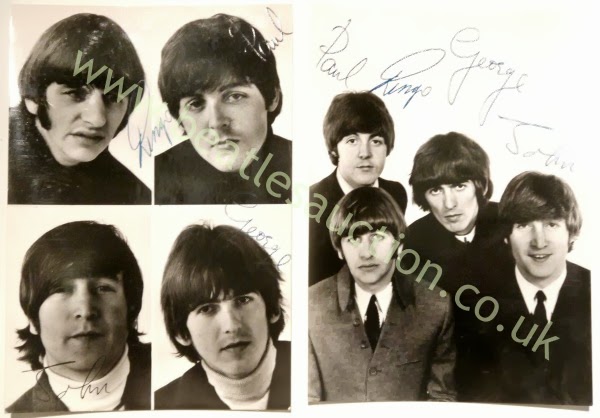 We never give out valuations on autographed items without seeing them first. If you have signed items you want looked at you can send us scans or photographs via our contacts page. Please make sure the images are as clear as possible. Or you can bring them into the shop, please ring us first to make sure that Stephen is available when you visit as he is the person who does all the valuations.

All images on this site are watermarked, contact us if you need to see non-watermarked images for press use or when considering whether to bid on an item.


This original Cavern Club mug dates from around 1967 when the club made lots of memorabilia for visitors to buy.
The colourful design shows a band on the famous stage and the mugs were produced by a Liverpool firm, Prince William Pottery, which is still going today.

While the mugs were manufactured in Liverpool the decals themselves were made by Precision Studios Ltd in Stoke on Trent. The transfers came of a sheet of twenty. These sheets look fabulous framed up on the wall.
Both of these items are up for sale in the next Annual Liverpool Beatles Auction organised by The Beatles Shop. The auction takes place on Saturday 23rd August 2014 at the Paul McCartney Auditorium, Liverpool Institute for the Performing Arts. If you have any questions about items in the auction, or would like a valuation on any items you may have please see our contacts page by clicking here.

Please note, all images on this site are now watermarked. If you would like to see images without watermarks either for use in the press or to view the item properly before deciding to bid please contact us.

As we wrote last month, concert tickets tended to get thrown away after the event. This makes them collectible.

So far we have two concerts tickets in the next Liverpool Beatles Auction.

The first is for Newcastle City 4th December 1965. It was the band's last appearance at the venue.
The ticket is expected to fetch between £120-£140 when it is sold this coming August. 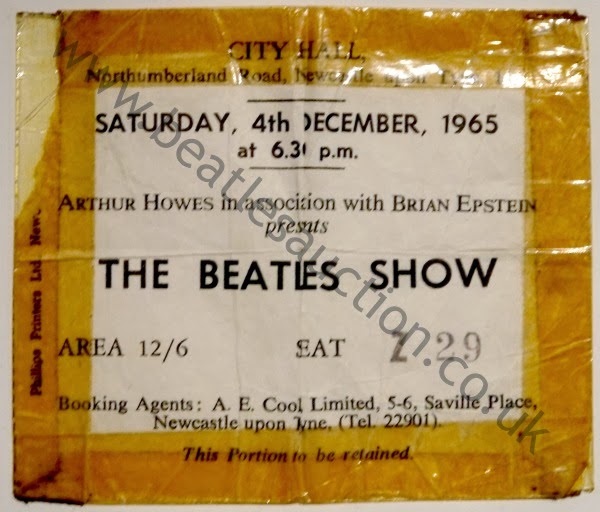 The other ticket is for "Another Beatles Christmas Show" at the Hammersmith Odeon. The show ran at the venue from 24th December 1964 through to 16th January 1965 with two performances a day. This ticket is for the second performance on Saturday 2nd January 1965. It is also expected to reach between £120-£140 at our next auction. 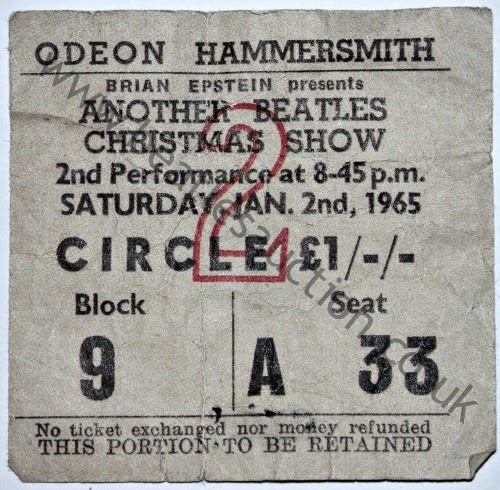 All images on this site are watermarked, contact us if you need to see non-watermarked images for press use or when considering whether to bid on an item.

Formerly the property of a Beatle...

We have sold a few unusual items over the years we have doing the annual Liverpool Beatles auction, many of them used to belong to Beatles.

These school books were used by John Lennon while he was at Quarrybank school and as school kids did, he wrote his name inside the books so they could be returned if they were lost. We sold both of these last August. Because of the early signatures inside "Six Modern One Act Plays" reached £2800 and "The British Isles" fetched a whopping £7400!

Occasionally the fan club would get hold of items to cut up and send out to the fans. In 2011 and 2012 we sold these small pieces of Paul and John's shirts, both with notes from Freda Kelly, the fan club secretary.
In 2011 the bit of Paul's shirt went for £220 and the next year the piece of John's shirt sold for £320. 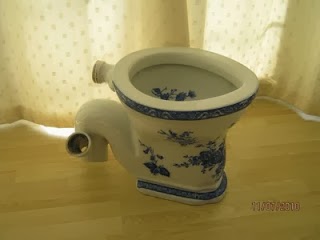 Last year in our auction a black knitted tie that was given to a fan by John Lennon in the Cavern Club sold to one lucky bidder for £3100.

But of course, we think it will be hard to top the star lot in our 2010 Liverpool Beatles auction when a toilet that was formerly in John's house in Tittenhurst Park sold for £9500!!


If you have something that once belonged to a Beatle and you want a valuation please contact us. The details are on the contacts page on this site. All valuations are free.