On 3rd August 1963 the Beatles took their final bow on the stage at The Cavern Club. The tickets for the show sold out within about half an hour of going on sale. (Tickets were only available to Cavern Club membership card holders.)
On the night the tickets were taken from those attending as they went in. Not many were able to retain their tickets.

Forty-nine years and twenty-two days on from that show we will be auctioning a very rare ticket for that final performance. 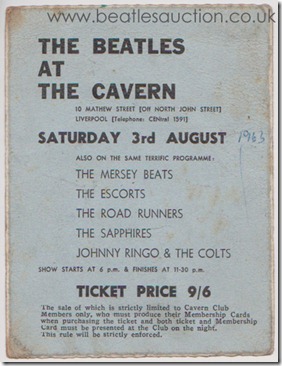 This concert wasn’t without incident. The Mersey Beats, who were also on the bill recall that they had told the Beatles to be careful they didn’t slip on stage as the heat from the audience in the poorly ventilated venue was causing condensation on the walls and every where was wet. All the dampness caused the electricity to fuse and the lights went off while the Beatles were on stage.  Billy Kinsley (in his biography by Spencer Leigh) recalls that during the power outage Paul and John started to sing “When I’m 64” – a song that would not be released on a Beatles record till 1967 and the Sgt Pepper album!

Mark Lewisohn’s  book The Beatles Complete Chronicle says that Bob Wooler remembered that on the night Brian Epstein promised that the Beatles would return one day, but they would never play the venue again.

About a dozen fans camped out over night to be sure of getting a good position inside the club to watch the show. In the early hours of the morning a car pulled up near by and Paul McCartney and Ringo Starr got out, chatted to those waiting for a while and signed autographs. The copy of the first issue of Beatles Monthly pictured below was signed at that time for someone who was waiting out in that queue. This is also being sold in the Annual Liverpool Beatles Auction this August.

The estimate for the autographed magazine above is £500-£600.

This will be the 22nd Annual Liverpool Beatles Auction organised by The Beatles Shop on Mathew Street.
The auction will be held on 25th August 2012 at The Paul McCartney Auditorium at The Liverpool Institute for the Performing Arts starting at 10.30am.
A viewing day will be held the day before in the same venue from 11am to 4pm.
This year’s auction is now full, but we will start taking items for our 2013 event from January next year.
Auction catalogues will be available about two weeks before the event. (Please check back here for details nearer the time)

Further information on the above and all items in this year’s auction is available from the Beatles Shop manager Stephen Bailey, on 0151 236 8066 or via email auction@thebeatleshop.co.uk

Better images of most lots can be provided to press on request. 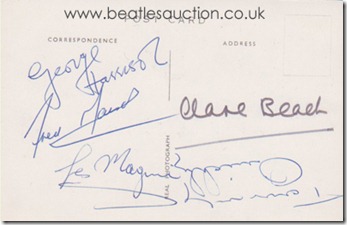 A Trio of Promo Posters

These large promotional posts all date from the early 70s.

This one is from 1970 and features the Let It Be box set. 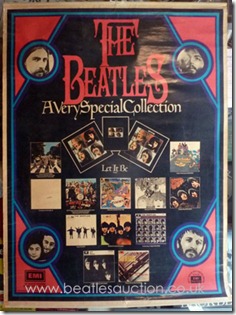 This one is very similar to the one above but dates from 1973 as it features the “red” and “blue” albums. 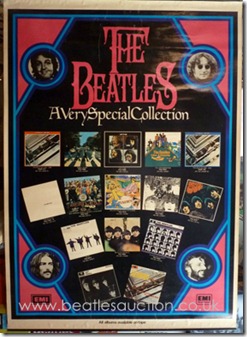 And finally this one is to advertise the “red” and “blue” compilations release in 1973. 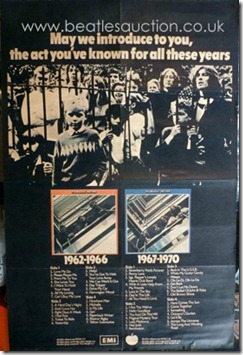 These posters carry an estimate of £100-£140 each and will be sold in our 2012 Beatles Auction in August. Click here for details

In The Hand of Bob

For the grand reopening of the Cavern Club in July 1966 the legendary club DJ Bob Wooler was called upon to write a little something about the club for the official programme of the event.

These two handwritten A4 sheets contain the results of that request. 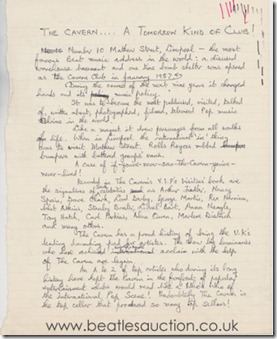 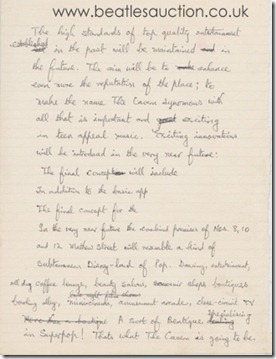 It was edited a little before it was printed in the programme. These small slice of Cavern history is being sold (along with a copy of the Cavern Reopening Programme) in the 2012 Liverpool Beatles Auction. The estimate for this lot is £700-£800.

Although membership cards from the years the Beatles actually played at the Cavern are usually more sort after by collectors we do occasionally come across later cards and as these are often cheaper to buy they make great items for people just starting their Cavern Club memorabilia collections. 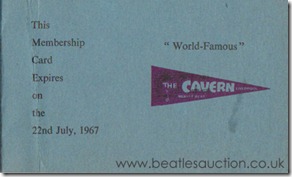 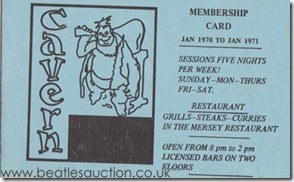 These two original Cavern Club pins from 1967 are up for auction in August. They are being sold separately and are estimated to reach £50-£60 each. 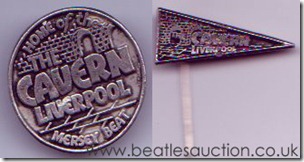 They are great for fans looking to start their collection of Cavern items.

We had one of these 1967 Christmas cards in the auction last year. The version that was eventually produced was printed in black and white, but the original prototype for the card was actually in colour. 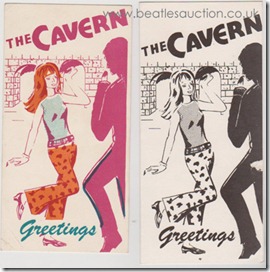 Rock Around The Clock at The Cavern!

In April 1968 the Cavern Club played host to a rock and roll legend – Bill Haley. 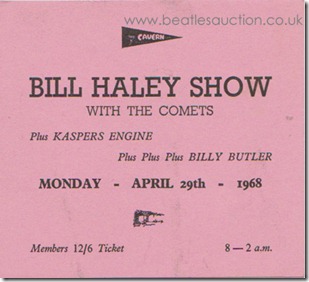 The support was a band called Kaspers Engine (which we think were from Bebington) and Billy Butler compered the evening.

This ticket for the show is going into our auction in August and has an estimate of £30-£40.