We have recently taken in two more Paul McCartney signatures for the auction in August.

As with the previous post the signatures come from two different eras of Paul’s career. 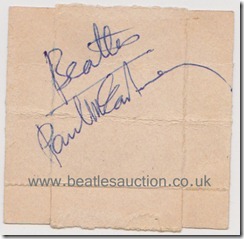 The autograph on this cigarette packet was obtained in Rhyl in 1963 when the Beatles played at Ritz Ballroom in July that year.

The second autograph has an interesting story attached to it. The vendor used to 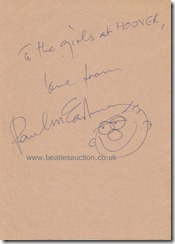 work for Hoover and a colleague had to go on a call to Jean Boht’s house. Jean Boht was the star of the popular sitcom Bread, playing the matriarchal Ma Boswell. The vendor was a fan of the series and asked if her colleague would get her an autograph. They did, and they also got an autograph from the other person visiting Jean Boht that day, who just happened to be Paul McCartney. The autograph also features a smiley face drawn by Paul which adds to the appeal of the signature.  It carries an estimate of £400-£450.