There are two very special signed items going into the auction this year. Both are from the same vendor who was a fan from the early days and both are singles.

First is the debut single for the Beatles on the Parlophone label, Love Me Do. It is a red label version, purchased on the day of release from NEMS. A few days later it was taken down into The Cavern Club where it was fully signed on the B-Side by all four Beatles. (The vendor had participated in a vote to decide what would be the single release and their vote was for PS I Love You.) 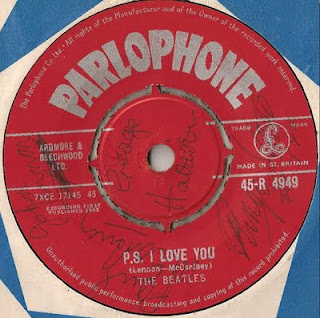 (click image for larger picture)
Estimate - £6500 - £8000
Similarly this red label Please Please Me single was purchased from NEMS as soon as it was released and again a few days later was dutifully taken along to a Beatle Cavern gig and fully signed by the whole band. 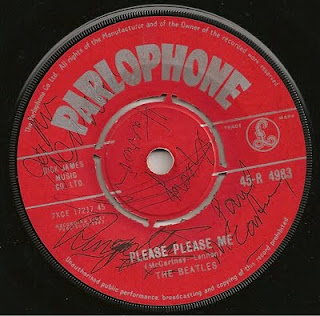 The auction takes place on August 27th 2011 at The Paul McCartney Auditorium at LIPA. It is organised by The Beatles Shop on Mathew Street, where lots are still being taken in up until June. Contact details are listed on the right of this page, and potential vendors and buyers should read the FAQs and the relevant buyers/sellers notes.
If you have any items of interest for the auction please contact us. Click the link on the right for details of how to get in touch.
Press enquiries should be made through the same contact link. Better images of items can be made available to the press upon request.
Posted by A-M at 11:48