The infamous Butcher sleeve.
Originally this image was to have appeared as a very small as part of an icon at the end of a gatefold piece of album art conceived by the photographer Robert Whitaker. Sadly the epic piece never came to fruition and in their wisdom, someone at Capitol used the now notorious image as the album cover instead. Once stores refused to stock it with the image the covers were pasted over with a much less controversial image of the fab four and a large packing trunk.

This is a third state, or peeled, Butcher Sleeve. (The original uncovered sleeves became collectable so some collectors peeled their second state, or pasted over, albums with varied results.) 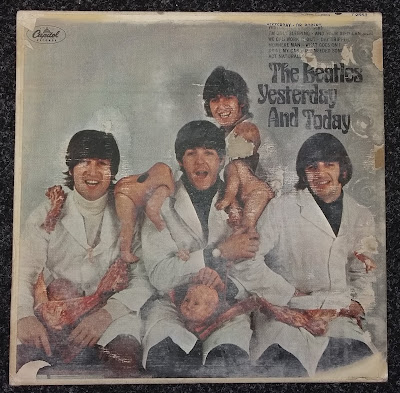 As you may have guessed this peeled Yesterday and Today album is going under the hammer in our Annual Liverpool Beatles Memorabilia Auction this coming August. It has an estimated value of £300-£350

Email ThisBlogThis!Share to TwitterShare to FacebookShare to Pinterest
Labels: 2019
Newer Post Older Post Home
The Beatles Shop on Mathew Street has been proud to organise the annual Liverpool Beatles Auction for several years.