The Fourmost were a prominent band of the Merseybeat era with their most famous single “Hello Little Girl” being penned by Lennon and McCartney.

Sadly, band member Mike Millward developed leukaemia in the mid-60s and made his final departure from the band in December 1965, passing away a short while afterwards.

A tribute concert was held at the beginning of April 1966 at the Grafton, raising money for Cancer Research  and a Memorial service followed later the same month.

A selection of artefacts from these occasions are for sale in 2013 auction. They include an order of service plus ticket and flyer for the Night For Mike concert. 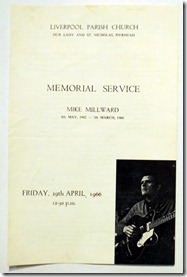 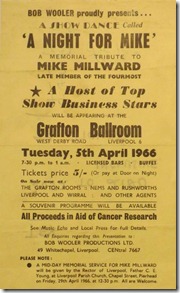 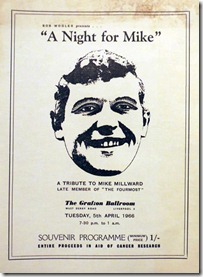 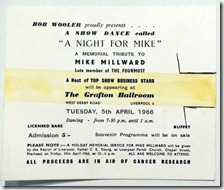 The 2013 Liverpool Beatles Auction takes place on 24th August at The Paul McCartney Auditorium at LIPA in Liverpool. Over 300 lots will be up for auction. Catalogues will be available end of July/beginning of August – details of how to download/obtain a catalogue will appear on this blog site nearer the time.