“Mimi’s Still Got The Cats”

John’s Aunt Mimi took in student lodgers. One of these was a veterinary student who stayed at the house on Menlove Avenue in the late 50s, while John was also living there.

A few years later in 1964, this student caught up with his former house mate at a Beatles concert in Cardiff and was treated to the autograph below. 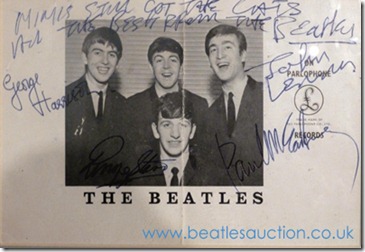 It is fully signed by all four Beatles with John adding a personal message about Aunt Mimi and her cats at the top.

The annual Liverpool Beatles Auction takes place at the Paul McCartney Auditorium at Liverpool Institute of the Performing Arts on Saturday 25th August 2012. It is organised by The Beatles Shop on Mathew Street, Liverpool.

Any press enquiries about this item,the vendor or the Beatles Auction in general should be made to The Beatles Shop (see contact section on this website)
Posted by A-M at 12:09