A Letter From Freda

Back in the sixties when you wrote to a fan club more often than not you got a personal reply from an actual person rather than the modern day standard form letter.

If you wrote to the Beatles you may have received a reply from one of the fan club secretaries.

In this case the correspondent got a reply from the longest standing Fan Club secretary, Freda Kelly. 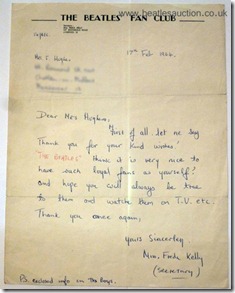 (address on the letter has been blurred for publication, it is clear on the actual item)

This letter will be sold at our auction in August and has an estimated value of £100-£130.