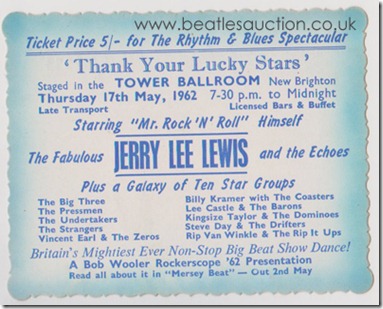 This ticket for the rock and roll legend Jerry Lee Lewis has a Beatle connection. His backing band The Echoes were without a drummer and as Rory Storm & The Hurricanes had not long returned from a stint in Hamburg, Ringo Starr sat in as the drummer on this gig!

This mint condition ticket carries an estimate of £60-£80 and is due to be auctioned in the Annual Liverpool Beatles Auction organised by The Beatles Shop. This year’s event takes place at the Paul McCartney Auditorium at the Liverpool Institute for the Performing Arts on Saturday August 25th 2012.