The original Yesterday and Today album cover has become quite infamous. Known colloquially as the “Butcher” cover it depicted the Beatles in white coats posing with broken dolls and chunks of meat. The image was originally intended to appear in a much smaller format on a gatefold cover concept designed by Robert Whitaker but the decision was made somewhere along the line to just use this particular photograph. And then they changed their minds and withdrew the sleeve, covering those already printed with a slick of another photograph by Robert Whitaker.

Several collectors have had their album sleeves peeled to reveal the Butcher sleeve underneath, but this can result in damage if it’s not done properly.

This copy of the album has an unpeeled cover in very good condition. It can’t be seen in the picture but you can just about see the image of Ringo’s dark coloured top (worn under his white coat) through the pasted on cover.
It is going up for sale to the highest bidder in our Annual Liverpool Beatles Memorabilia Auction in August. 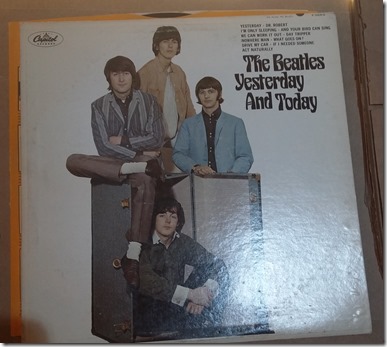 The auction will be held on Saturday 25th August at the Unity Theatre, Liverpool
Posted by A-M at 02:00