FAQ - Seller Notes - Buyer Notes - Contact Us - How To Find Us
We will bring you the details of the 2021 Auction as soon as we know them.
We're sorry but we can't take any more items for the 2021 Auction. Stay tuned for news of some of the many, many items that will be going under the hammer.
In the meantime, stay safe everybody and we hope to see you soon.

Unpublished Photographs of The Beatles in the Cavern Club!

Last week we had a ticket that we'd never seen before and this week we are thrilled to have come across two rare, unpublished photographs of the Beatles in the Cavern Club.

The images show the boys in the Cavern in early 1962. Paul is in a black roll neck top, George and John are in shirts and sleeveless pullovers. The drummer isn't visible in the photographs but it is Pete Best's drum kit.

The vendor, who cannot recall how she obtained the photographs, later got them both signed on the reverse by the Beatles. This would have been after August 1962 because Ringo has signed. Paul McCartney has signed for John Lennon in both cases.
Finding previously unseen items is always exciting and proves that you never know what you have stored away somewhere.

The estimate for the photographs is yet to be confirmed. They will be sold as two separate lots. 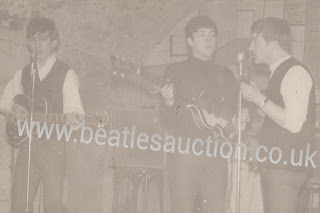