On 27th February 1966 the Cavern Club closed. Bailiffs went it with the help of a police presence and the 100 or so teenagers who had built impromptu barricades left peacefully. Despite a public campaign to raise money to reopen the club it was sold on 18th April by the court receiver as part of Ray McFall's bankruptcy proceedings. It was bought by a gentleman named Joe Davy who revamped and reopened the famous club.

The club reopened officially on 23rd July 1966. The opening ceremony took place at noon and there was a power failure during it! Harold Wilson officially reopened the club and the ceremony was attended by, among several others, Bessie Braddock MP, Ken Dodd, Billy J Kramer, The Fourmost, Georgie Fame, Dave Dee Dozy Beaky Mick and Tich, Jimmy Savile and Simon Dee.

This is an invitation to attend. 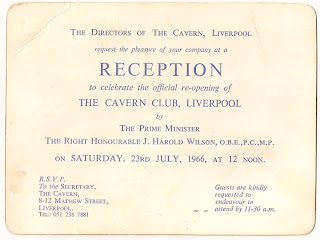 ’)
If you have any items of interest for the auction please contact us. Click the link on the right for details of how to get in touch.
Press enquiries should be made through the same contact link. Better images of items can be made available to the press upon request.
Posted by A-M at 14:15

Email ThisBlogThis!Share to TwitterShare to FacebookShare to Pinterest
Newer Post Older Post Home
The Beatles Shop on Mathew Street has been proud to organise the annual Liverpool Beatles Auction for several years.